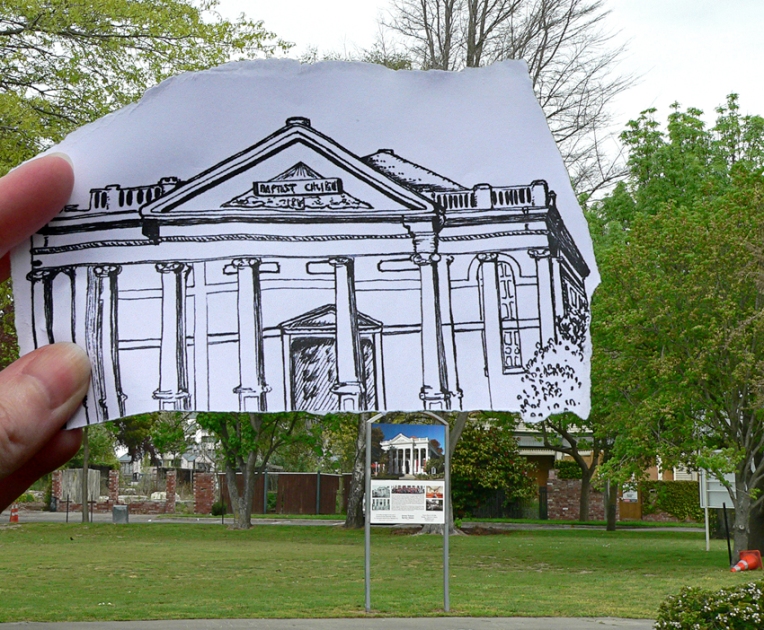 Built in 1881, the Oxford Terrace Baptist Church was one of the many buildings conspicuously absent from the landscape when we flew over Christchurch last month. I’ve circled the relevant piece of dirt in the photograph below (click on the photo for a closer look). The building was badly damaged by the September 2010 earthquakes and then completely collapsed in the February 2011 earthquake. It was famous for having a sign out the front which read: “Our building is cracked, the Church is fine!” Although the neoclassical structure (an unusual style for Christchurch) is not going to be rebuilt, there are reports that the damaged Oamaru stone is to be used in a sculpture ― what a wonderful way of honouring the spirit and tenacity of its congregation.

The sketch is originally from this student project. Ben Heine’s ingenious Pencil Vs Camera images were my inspiration for this series.

The beautiful building in the foreground, formerly the Trinity Congregational Church, was a restaurant and live music venue (Octagon Live) when this sketch was done. Built between 1873 and 1875, it sustained a lot of damage in the 2010/2011 earthquakes. There are plans to restore the timber interior and the 1871 pipe organ (thought to be one of only three of its kind left in the world).

The building to the right of the church was my old art school (you can’t tell from the photo but it’s in a very sorry state ― it was deemed unsafe following the February 2011 earthquake and put on the city’s ‘partial demolish’ list). The building on the left, the one on a bit of a lean, was the Hotel Grand Chancellor (now demolished). The hotel was built in 1986 and was Christchurch’s tallest building for more than 20 years.

The sketch is originally from this student project (click on the link and scroll down). The photographs were taken last week. Ben Heine’s ingenious Pencil Vs Camera images were my inspiration. This is my second ‘pen vs earthquake’ ― below is a link to the first one.

I love to paint and draw, take photographs and make things. And did I mention music...

All content © 2010–2022 Anna Cull unless otherwise indicated. All rights reserved.